BAND Protocol was founded in 2017 with an ambitious objective to render reliable and authentic data to the open internet. The protocol works as an open standard to bridge blockchain applications with trusted off-chain data. In simpler terms, any decentralized application has to face the challenge of accessing the trusted data through traditional Web 2.0. As such, Band Protocol comes into the picture. Band Protocol is a cross-chain data oracle platform that resolves this challenge by constructing a decentralized bridge that can allow safe and secure interoperability, i.e. data exchange between smart contracts and the traditional web. Band Protocol was launched on Ethereum Blockchain in September 2019 with the financial aid from Sequoia Capital, which thrust it into direct competition with the fast-emerging Chainlink (LINK). Why Does Blockchain Need BAND Protocol? There is no doubt in the fact that Blockchain technology brings a plethora of opportunities for allowing immutable storage, data ownership, verifiable computations, and so on. Still, when it comes to secure access to the real-world data that lies beyond the blockchain networks, the technology fails to do its job to incorporate safe and secure interoperability. So, Band Protocol extends the functionalities of smart contracts by providing the technology with access options to trusted data without any failure points. [caption id="attachment_8268" align="alignnone" width="1024"] 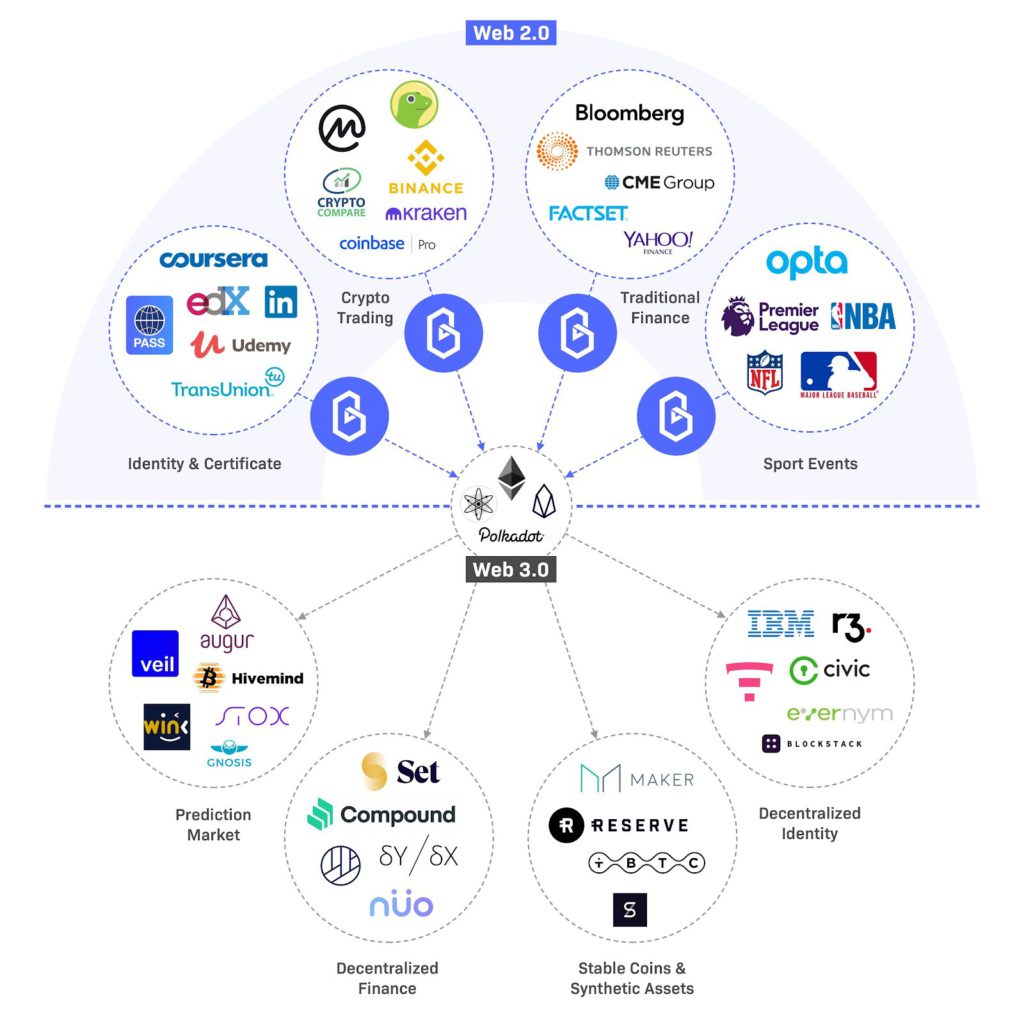 Source: State of the DApps ("Band Protocol: Reliably Connect Smart Contracts to Any External Data Source or API")[/caption] Use Cases for BAND Protocol Band Protocol has made it possible for the smart contract applications like predictions markets, decentralized finance applications, games, etc. to be made on-chain without depending upon the failure points belonging to the centralized oracle. Let’s understand the use case for Band Protocol with the help of an example. DeFi apps require price feeds on the loan centralization process as well as a token swap. For this, the developers can make use of the built-in feature of Band Protocol, i.e. price oracle to develop DeFi applications with complete confidence that the price feeds they have engaged cannot be tampered with. The flexible oracle design of Band Protocol makes it possible for the developers to utilize any data that recognizes real-world events, weather, sports, random numbers, etc. The development team can build custom-made oracles with the help of WebAssembly to link smart contracts with traditional web APIs in just a matter of minutes. Role of BandChain BandChain has been designed in a way that makes it compatible with a wide range of smart contracts and blockchain development frameworks. It is an independent and powerful blockchain, made specifically to fulfill oracle computations, as well as data sourcing and aggregation. BandChain can complete the extensive and complex job of extracting the data from external sources and then clubbing the data together to constitute a format that can be easily understood and verified methodically across various blockchains. Today, BandChain has made it possible for the blockchain developers to create the following and use them in decentralized applications conveniently (i.e. price feeds, event reports, and other data oracles). BAND Protocol 2.0 Band Protocol 2.0 was released on June 10th, 2020, on the Cosmos network. It is a new and improved version that aims at providing accurate data to various vendors at an accelerated and faster speed. The upgraded version possesses the capability to process and execute 50 transactions per second. Along with incredible speed, Band Protocol 2.0 also has the advantage to dodge network congestion or blockage on the Ethereum chain, which was linked to massive losses in March. Band Protocol 2.0 will also provide an instant finality feature. This feature belongs to the Cosmos infrastructure, and with the help of it, there shall be no need to wait for various blocks to be generated to confirm and approve a transaction. Currently, this is an issue that Ethereum and Bitcoin users are facing. With help from Cosmos, Band Protocol can send oracle data to various blockchain networks just with a single transaction. Also, fast and accurate data feeds will allow various DeFi applications to achieve their maximum potential in a shorter period and provide users with quality services. Price Overview The trading price of Band Protocol is currently running at $14.44, along with an impressive ROI of 2,973.23%. The market rank is also competitive, with 46th spot and total market cap amounting to $290,808,423. There are no sharp dips, and the overall market looks promising.