The Ethereum blockchain has become increasingly expensive to use - so much so that many users have begun migrating to cheaper, less secure alternatives. This is almost entirely due to the “gas” fees that must be paid to the network for each transaction. The current fee structure associated with trading has created a hyper-competitive market amongst traders - If a trader wants their on-chain trade to be executed faster, they pay a higher fee to accelerate confirmation, creating a bidding war that artificially inflates fees beyond market value. EIP-1559 is an attempt to correct this.

It’s difficult to overstate just how inefficient the current fee structure is. According to notes published on the Ethereum website, there is a huge gap between fees paid amongst traders in the 10th percentile vs. the median - to the tune of 3x and 5-8x for the mean. The uproar expressed by the bottom 90% of traders is completely warranted as the available bandwidth in each block is more than enough to include these transactions.

EIP-1559 changes the structure of gas fees to include a “base fee” which varies according to market demand. The base fee will fluctuate based on the amount of gas used in the previous block, attempting to keep a target of 12.5M gas used each. Effectively, this new method will replace the auction system with a fixed-price system (except in cases where gas demand is more than the 25M max per block).

In addition to changing how network fees are determined, EIP-1559 also changes who gets the fees. The current problem was created in part by miners who were spamming the network with artificially high transaction fees to keep demand high - and inflate their own incomes. Introducing the BASEFEE makes this manipulation unprofitable, therefore disincentivizing miners from exploiting the network in this way. Further disincentivizing this exploit is the distribution of the BASE FEE - it will be burned.

Coin burning is crypto vernacular for removing these coins from circulation forever. Effectively, this means that Ether will become a deflationary asset, as its supply will likely decrease over time. ETH miners will still receive block rewards and a portion of fees - but the Ethereum blockchain will become far less congested, fees will likely crater, and the average user will likely be able to afford using ETH-based dApps again.

As expected, the mining community is quite unhappy about these changes - as it restricts their income to a predetermined minimum or maximum. This is to be expected given the anticipated and actual threat to their profits. As a counterpoint to their personal interests, miners have suggested that lowering profit margins will force small or independent miners to turn off their machines - centralizing the network hash rate on big farms. Such centralization could make the network less secure should one or more of these farms were to simultaneously go offline.

Some in the mining community have threatened to protest the implementation of EIP-1559 by turning off their miners and reducing network hash rates for 51 hours beginning April 1. This protest was suggested by a miner on Twitter called Red Panda Mining and gained significant traction among fellow miners with the increased use of hashtag #stopeip1559 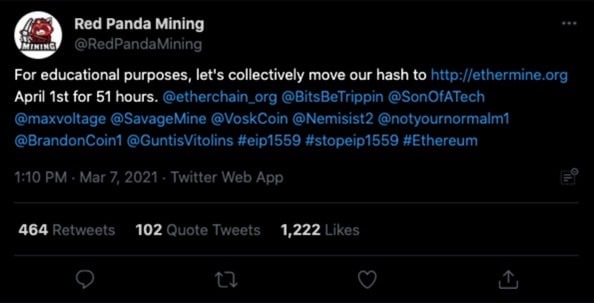 Another action miners have begun to take in a retaliatory attempt to reclaim profits is to pursue “Miner Extracted Value”. Based on software that was first published by the Austria-based Ether mining pool Ethermine, MEV is a blanket term for software strategies that allow miners to front-run on-chain trades to secure arbitrage profits. In short, these strategies identify trades waiting in the Ether mempool and “steal” the trade by copying it with a higher gas price. Once MEV scripts went public, miners were able to secure $1.7m in profits within the first 24 hour period alone. Research group Flashbots scanned the blockchain and found $314M worth of extracted MEV since Jan 1st, 2020.

These changes (and the drama surrounding them) are likely to send shockwaves through the Ethereum ecosystem and will likely be reflected in the price of Ether in both the short and long term. Some have speculated that the miner protest could lead to a price shock resulting in ETH temporarily losing up to 15% of its value. However, in the long term, many believe that ETH’s new deflationary system could lead to $10-20bn worth of Ether being burned per year. 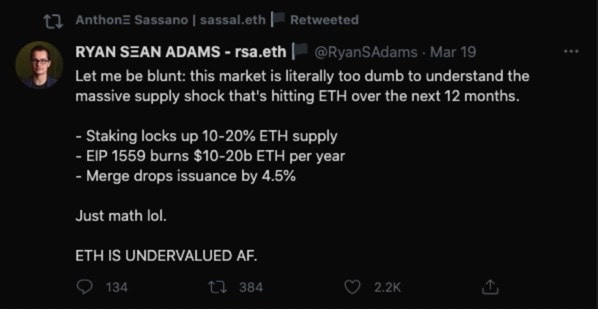 These changes, combined with the upcoming PoS implementation, which is expected to lock up to 25% of ETH’s supply, will only magnify the economic benefits.

Overall, it appears that EIP-1559 will be a positive change for the ecosystem. While there may be some short-term pain, the long-term gain of increased usability will prove to be beneficial.