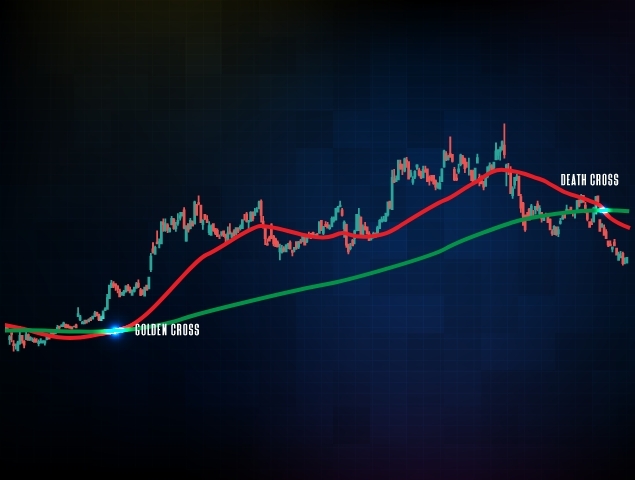 Let’s imagine a simple scenario. You decided to start trading a couple of months ago. In these two months, you have learned many new things that you never thought you would get to know. One of the many new things you have learned is what moving averages are.  Especially the simple moving averages. You already know what SMA is for, and how to use it. Then, someone tells you about golden crosses and death crosses. What are those? How do you identify them?

As we have said before, moving averages (MA) are trend indicators. They are a simple calculation of the price action over a specific period. They are represented in the chart as a line. The trend depends on the direction of the line.

When talking about simple moving averages, we need to set the days that will count for the data set. Obviously, the longer the period, the stronger the trend. Right now, we will work with a 50-day SMA and the 200-day SMA. The SMA50 represents the short-term trend, and the SMA200 represents a long-term trend.

What is the Golden Cross?

As we said, simple moving averages usually show both short and long-term trends. We have identified the SMA50 as the short-term trend and the SMA200 as the long-term trend. Now that we know this let’s jump in.

A golden cross is an opportunity to identify a reversal in the trend. With this, a jump in the price might be possible. Here, the SMA50 (short-term trend) goes over the SMA200 (long-term trend). This is usually a sign that a bearish period is about to end.

When an asset experiences a gold cross, it means that it will increase in price in the short term. Not only does it imply it will have substantial short-term gains, but it also shows that the trend of the asset may change.

As the name may tell you, this is a golden opportunity to enter the market. This is the time to go long.

What is the Death Cross?

Once again, we will use the SMA50 and the SMA200 as references.

If you have both SMA50 and SMA200 in place and the SMA50 goes under the SMA200, you have found a death cross. As the name shows, a death cross usually determines that an asset will enter a bearish phase.

A death cross does not necessarily mean you are about to lose all of your money. Truth is, if played right, a death cross might be the best chance you have to go short.

Things to Know About Crosses

Even if they are somewhat easy to identify, you need to be careful when trading golden and death crosses. If an asset has gone sideways for a long time, crosses might be seen regularly. These crosses are not worth trading. If there is no identifiable trend in both SMAs, golden crosses and death crosses do not mean anything.

Likewise, if the direction of both SMAs is the same, the crosses will not have any effect on the asset’s price.

Finally, remember that both golden and death crosses are trading opportunities. Do not tie yourself to an asset or sentence just for a cross. Seize the opportunity, and be diligent with your money.