Home / Buckle In: You Can Now Buy and Sell Bitcoin Through PayPal

Buckle In: You Can Now Buy and Sell Bitcoin Through PayPal Over the last week, there have been some of the big announcements in the cryptocurrency market as it was officially announced that you can buy and sell Bitcoin through PayPal. Bitcoin makes a strong move surging past $13,000 levels for the first time in 15 months.

How To Buy and Sell Bitcoin Through PayPal

On Wednesday, October 21, online payments giant PayPal made an official announcement of its entry into the crypto market. PayPal said that it will allow its users to trade Bitcoin and other digital currencies through its native digital wallet.

To offer its cryptocurrency trading service, PayPal has secured a license from the New York State Department of Financial Services (NYDFS). The payments giant also confirmed entering a partnership with the Paxos Trust Company.

PayPal said that it will also bring its crypto trading service to the users of its wholly-owned digital wallet Venmo. However, a look into PayPal’s terms of service shows that the company will restrict the movement of cryptocurrency to PayPal account holders only.  Also, cryptocurrencies bought through PayPal can’t be stored in any other wallet except PayPal’s native digital wallet.

PayPal said that it will also offer crypto shopping facility across all of its 26 million registered merchants. However, the merchants will receive payments in fiat.

Over the last week, Bitcoin bulls finally raged-in as the world’s largest cryptocurrency surges past $13,100 for the first time in the last 15 months. Over the last four trading days, BTC has gained more than 15% suggesting a strong bullish momentum. 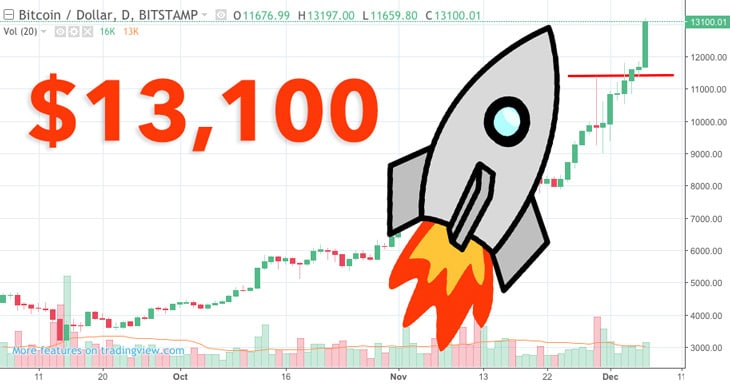 At press time, Bitcoin is trading at $12,999 with a market cap of $240 billion. With this latest move, Bitcoin also extends its market dominance to above 60%.

Apart from Bitcoin, the other top ten cryptocurrencies aka altcoins have shown a strong surge over the last seven days. Over the last week, the overall cryptocurrency market cap has surged by an additional $40 billion and is currently just under $400 billion.

Many analysts believe that PayPal’s official entry in the crypto space has provided the latest boost to the cryptocurrency market. The excitement investor confidence has been fueled further by rumors that PayPal will acquire BitGo, a leading digital asset trust company.

Market analysts think that with PayPal’s entry, other big financial institutions will soon follow suit. One of the biggest names in the finance and tech world, Chamath Palihapitiya (Venture Capitalist & Founder of Social Capital, shared his perspective on the necessity of banks to determine how they can support Bitcoin.

While all that has been happening in the cryptocurrency market, stablecoin-operator Tether has reportedly minted nearly half-a-billion fresh USDT tokens in just the last 72 hours.

Tether’s rampant issuance of USDT makes many market analysts think that it could be one of the reasons behind the Bitcoin price surge. In the past as well, Tether has been linked to manipulating and pumping the BTC price by flooding liquidity through its USDT tokens without actually backing them with the real dollar.

However, there’s no substantial proof to claim the USDT’s backing for the BTC price surge, most of the market analysts remain skeptical of Tether’s move.

At press time, the USD-backed stablecoin Tether (USDT) remains as the third-largest cryptocurrency by market cap of $16.1 billion. Since the value of each USDT token is $1, Tether’s total circulating supply is also 16.1 billion. Besides, Tether also has the highest 24-hours trading volume at $54 billion.

He notes that in the early years CBDCs are likely to remain more restrictive, however, think that they would evolve over time. Zhao doesn’t think that CBDCs will offer the same financial freedom as Bitcoin but goes on to add that:

“If there is a government pushing another cryptocurrency that’s even more open, more free, has less restrictions than Bitcoin, and is faster and cheaper to use, then that would threaten Bitcoin. But that is good for the industry, it’s just something better than Bitcoin, and would replace it.”

Recently, a large number of banking institutions have started showing interest in CBDCs. While China has also accelerated the development and testing of the Digital Yuan, many other countries have started looking into this. However, top economies of the world are still researching the benefits of CBDCs and its role in the monetary system.

Apart from China, other big economies like the U.S, U.K, Australia, Japan, and New Zealand have adopted a wait and watch approach at this stage. Big financial institutions like the International Monetary Fund (IMF) are also looking into how CBDCs can play a role in a global monetary system.

In his latest speech, Burkhard Balz, an executive board member of Germany’s central bank said that CBDCs are more of a political move rather than monetary. He states that if CBDCs have the same characteristics as traditional money, depositors would quickly withdraw their funds from the bank and convert into Digital Euro, at times of crisis.

“This might lead to the structural disintermediation of the banking sector and, as a consequence, could potentially dampen the provision of bank credit to the economy,” Balz warned.