Apart from the usual price volatility, a lot is happening in the cryptocurrency market on the regulatory front and other aspects. At present, the overall crypto market looks under pressure losing more than $200 billion in the last 24-hours and falling under $1.50 trillion.

Bitcoin (BTC) and almost all of the popular altcoins have corrected more than 10% in the recent market fall. However, before moving to market sentiment, let’s take a look at some of the top news in the crypto market.

Bitcoin (BTC) has now entered the White House! As per the latest news, the Biden administration’s top technology officer and antitrust expert Tim Wu is a Bitcoin millionaire as per his recent personal financial disclosure filings.

Wu has been the tough critic of the centralized data power owned by the tech companies. It turns out that Wu owns anywhere between $1-$5 million worth of bitcoins. Besides, Wu also owns between $100,001 and $250,000 of FIL tokens, the native crypto of the decentralized data sharing and storage blockchain, Filecoin.

Wu has some doubts over Bitcoin’s practical use for everyday purchases, however, notes that it “might work fine as a store of value that you can sell”.

However, former U.S. President Donald Trump recently referred to Bitcoin (BTC) as a scam. Trump said that he doesn’t like Bitcoin because it is emerging as a competition to the USD.

Trump said: “Bitcoin, it just seems like a scam. I don’t like it because it’s another currency competing against the dollar. The currency of this world should be the dollar. And I don’t think we should have all of the Bitcoins of the world out there. I think they should regulate them very, very high. It takes the edge off of the dollar and the importance of the dollar”.

On Monday, June 7, the Department of Justice (DoJ) and the FBI announced that it has seized 63.7 BTC worth $2.1 million from the Bitcoin address that belonged to the hacking group Darkside involved in the ransomware attack on Colonial Pipeline last month.

The DoJ deployed a blockchain explorer software that helped it trace the movement of funds on the transaction. The FBI said that it came across one such address belonging to the hacker having 63.5 BTC. In another affidavit, the FBI agent said that they got access to the private keys of the address by which it could seize funds. However, this has raised some concerns about the Bitcoin network security.

Business intelligence firm MicroStrategy announced that it is willing to fund its next Bitcoin purchase by selling $400 million worth of corporate bonds. The could software company has been making aggressive Bitcoin purchases over the last ten months and holds 92,079 BTC in its treasury.

With another $400 million, MicroStrategy can buy an additional 12,000 BTC. So far, the company has already sold over $1 billion worth of corporate bonds to fund its Bitcoin purchases.

Square Inc, the digital payments firm owned by Twitter CEO Jack Dorsey announced that it working on a bitcoin hardware wallet that facilitates easy and secure storage of the crypto assets without going through the technical challenges. Besides, Square announced a $5 million investment in developing solar-powered crypto mining solutions in partnership with Blockstream.

Latin American country El Salvador is looking to introduce legislation ahead this week that will recognize Bitcoin as a legal tender. This will make El Salvador the world’s first sovereign nation to adopt Bitcoin legally in its financial ecosystem along with the U.S. Dollar.

Bloodbath in the Crypto Market As Volatility Ensues

With the latest price correction, the Bitcoin Fear and Greed Index has dropped to 13 suggesting extreme fear in the market. With today’s price crash, the BTC’s year-to-date gains for 2021 have dropped to 14% which is below most of the mainstream assets. 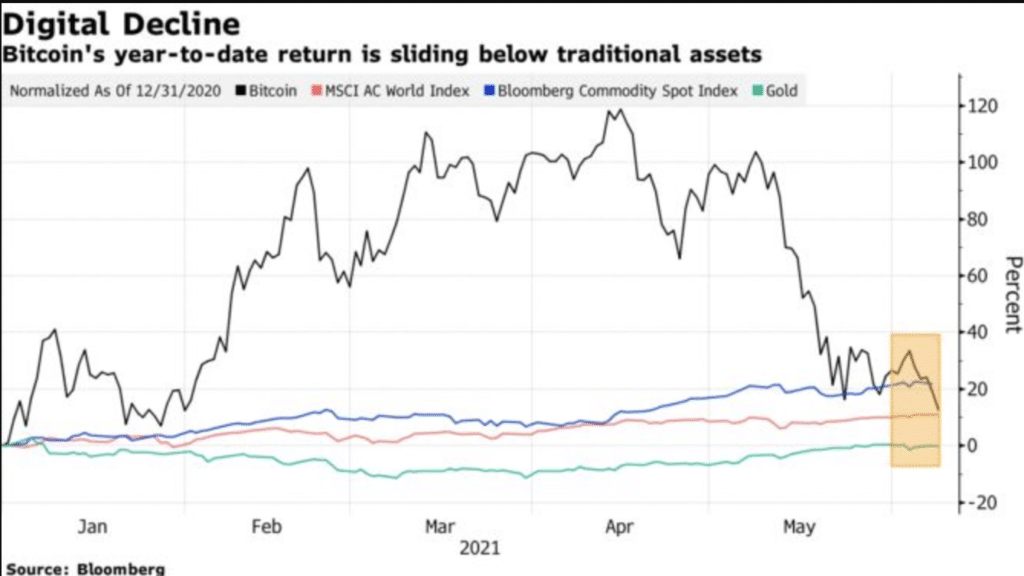 On the other hand, with the rising number of short positions, the overall sentiment for Bitcoin looks bearish. Bitcoin’s contract funding rates on BitMEX have turned negative which is actually a buying opportunity as per on-chain data provider Santiment.

If we have a look at the altcoin market, it has collectively lost over $100 billion over the last 24 hours. The world’s second-largest crypto Ethereum (ETH) is currently down by 11% slipping under $2500 levels.

Interestingly, Ethereum continued to entice institutional players during the last month of May 2021. While the open interest for Bitcoin dropped by 25.8%, the same for Ethereum surged by 9.9% as per data on CryptoCompare. 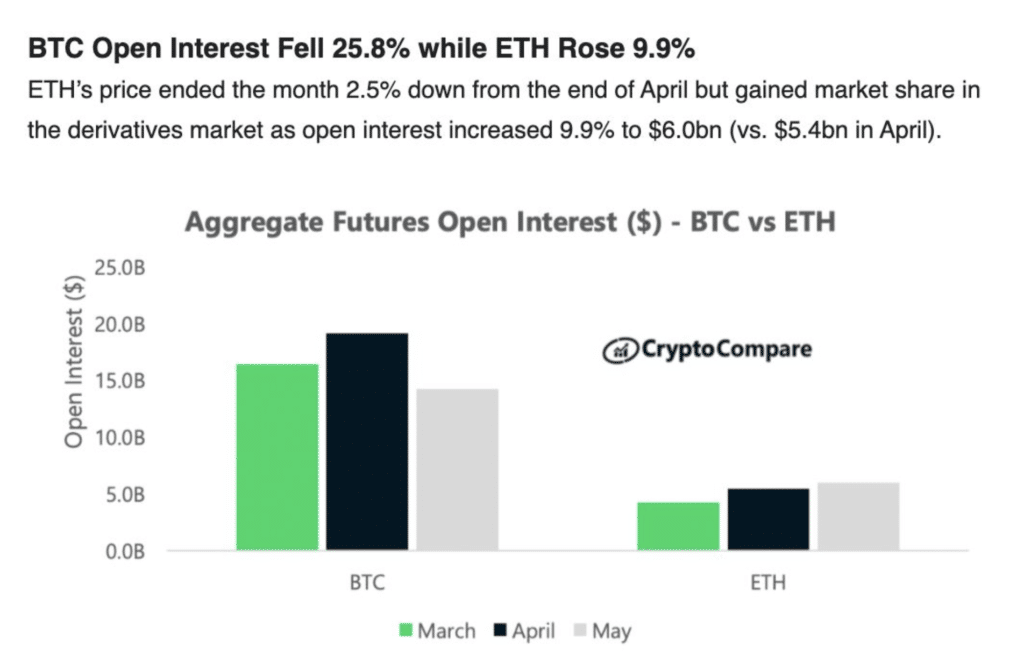 On the other hand, the number of Ethereum active addresses continues to surge every day while gas fees have reached lows not seen over the last year.

Looking at other altcoins, giants like Binance Coin (BNB), Cardano (ADA), Polkadot (DOT), UniSwap (UNI) all have corrected between 14-15% today. 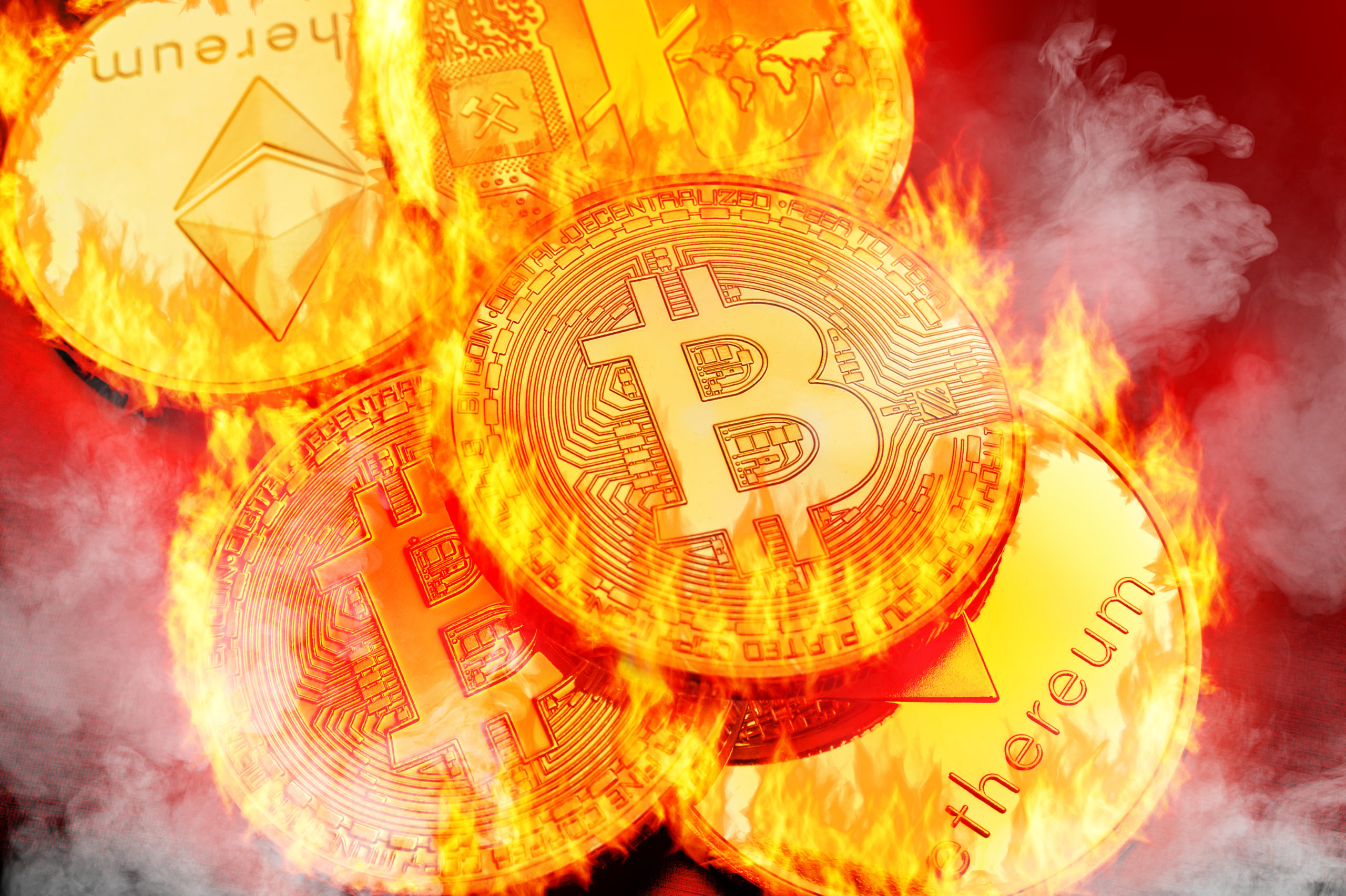 What To Do With An IRS Warning Notice For Cryptocurrency