Home / Bitcoin: The Return of Volatility

Bitcoin: The Return of Volatility

It’s official: Bitcoin’s volatility has returned! Let’s take a look at the 4-hour chart to contextualize where Bitcoin was on 07/26. 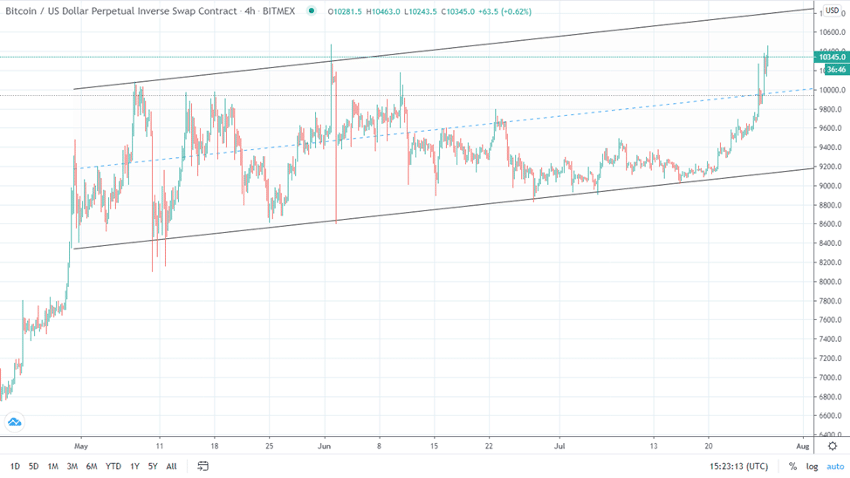 First, we have to point out that Bitcoin has been on a rising price channel since May. If you look further into this channel, you can see that the first half of the channel was full of volatility. In contrast, in the second half of the chart, the price stabilized (and brought some normalcy to the day).

Bitcoin was in the lower part of the price channel since June 11th. On June 24th, Bitcoin entered a low volatility cycle, as it hovered between $8,850 and $9,500 and remained stagnant. The story remained the same as we went through July, as Bitcoin traded in a $350 range between July 9th and July 22nd.  Unless you were over-leveraged, there was not much upside to trading Bitcoin.

But, last week, Bitcoin surprised everyone. Volatility was officially back. Bitcoin began a pretty slow but steady rise. On Sunday, Bitcoin price touched $10,000 after a month and a half trading underneath it. As of now, Bitcoin is trading over $10,000, and euphoria has filled the space. Bitcoin had a rather strong weekly close – Something that had not happened in a long time.

This is a hard question to answer. Right now, we have bullish arguments as well as bearish ones. It all depends on where your bias is and how you analyze it. For example, if you are bullish, you might take the 1-day timeframe chart. On it, you can draw a line from December 2017 ATH like this. Here, you could say that the downtrend line has just been broken. In this case, your bias would confirm it is indeed the beginning of a new long-term bullish cycle. Truth is, Bitcoin broke an 88-day range – so there are reasons to be bullish.

Yet, looking at things with a bit more perspective, you might know that you can draw that line in many ways. You might draw the line in other time frames, and it may have broken when BTC was trading at around 3.2K. So, you need to be careful.

If the downtrend line was indeed broken, we would need confirmation. Bitcoin would need to stay above the psychological resistance/support of $10,000. If that is the case, Bitcoin may need to break a couple more resistance with enough volume. Not only that, but it also needs to stay above them to confirm it.

Bitcoin has also given clues of a possible retracement. Yet, be careful – a retrace will make this a healthy rise. For example, Let’s take Bitcoin’s 4-hour time frame chart. Bitcoin: What to Expect

As of now, the most probable thing for Bitcoin is to get close to $11,000. This is the upper line of the rising price channel. After that, Bitcoin will probably go down. This way, it may end up an Elliot wave count that started in May. Starting a new Elliot wave count may take Bitcoin to new places.

Yet, if Bitcoin indeed broke the two-year-and-a-half downtrend line, we may see it going to $13,500 in the first place. “Why $13,500?” You may ask. Truth is, $13,500 is last year’s all-time high. This creates an important price resistance, which also happens to be psychological.

Whatever the situation, do not let the outcome catch you off guard. Have your stops and take profits in place. If you have already secured gains, start trailing your stops. Be diligent with your money, do not risk more than you are willing to lose.