The crypto market this week has turned towards Bitcoin’s potential competitor, Ethereum. The Ether coin has reached levels of $320, reaching higher than the previous high of $280 in February. It is currently trading at the highs that were set in July 2019. The Ethereum market has rallied over 36% in a week. The demand for ETH has increased by over 260% since March 2020.

There have been significant structural changes in the infrastructure of Ethereum that caused the price to surge to these levels.

‘Santiment,’ a cryptocurrency market analysis firm, said that the Ether price surpassed the $300 mark for the 42nd time since its launch. The researchers also noted that an increase of $50 ($350) would be considerable because such events have happened only thrice. A tweet by Santiment read, “It’s clear that #Ethereum is sitting in its ‘sweet spot’ where the most polarization has historically unfolded (between the $200 and $300 levels) during its five-year history.”

The revolutionary Decentralized Finance has been gaining popularity since its launch. Besides, with the introduction of ETH 2.0, a significant upgrade to the current Ethereum network has been major news since the beginning of 2020.

Post -“Black Thursday” the crypto market fall on March 13,  Ether prices slumped to $90, the expansion of the DeFi market got intense. Furthermore, with the deployment of new protocols, such as Compound, Aave, Maker, and Synthetic, the demand increased to exponential figures. In May, no more than a billion dollars were locked in the DeFi platform. Within two months, as on July 26, over $3.75 billion was stored in different DeFi protocols.

The use of DeFi is expanding with a rate that the Ethereum network is struggling to keep up with. When users make use of DeFi platforms, the data needs to be sent in the form of Smart Contracts and transactions.

The head of research at TradeBlock, John Todaro, tweeted saying that the expansion of Decentralized Finance would take the prices of ETH much higher, at least in the long term.

The Deployment of ETH 2.0

The implementation of ETH 2.0 has been in the crypto news for quite some time. With this upgrade, the Ethereum network will be switching from its current Proof-of-Work (PoW) consensus mechanism to Proof-of-Stake (PoS) mechanism. This would completely change the structure of how miners are rewarded.

As per the latest news from the Ethereum blog, developers have released the validator launchpad for ETH 2.0 final testnet. With this, users are allowed to participate in the testnet’s PoS. This factor has increased the bullish sentiment in the Ether market.

Moreover, since the beginning of April 2020, the Ethereum market’s option and spot demand have increased significantly.

Proactive progress in the official launch if Ethereum 2.0 could further boost the demand for Ether in the subsequent months.

Below is the price chart of Ethereum against the US dollar on the 1 Week timeframe. Since its launch, there have been several upside and downside swings. 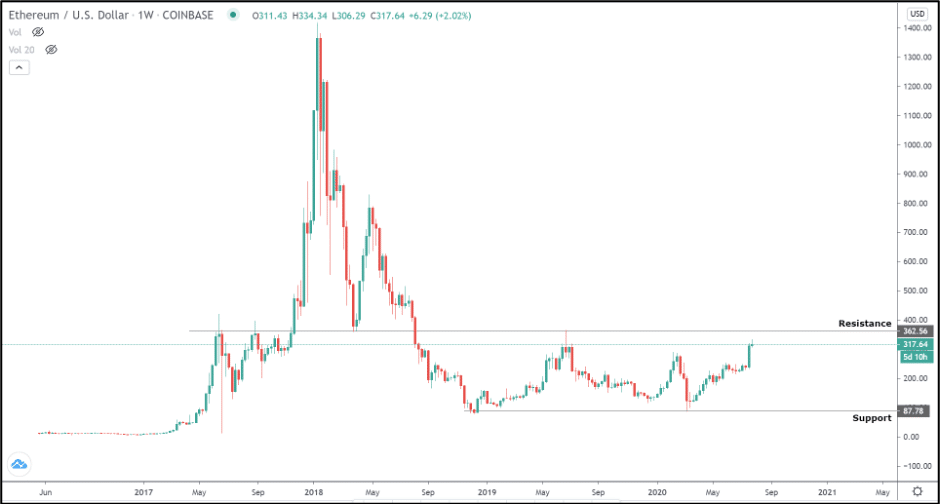 On a larger scale, the market is in a downtrend, $362 representing the resistance level. From 2019, the market has been moving sideways. The support level around $90 is firm, as it has reacted off from it twice.

The first time, the market touched the $87.7 level, it went up to $360. In March 2020, the price came down to the same level and reacted off strongly and took out the intermediate resistance at $292. And the current bullish sentiment in the ETH market still looks intact.

In the coming trading session, we can expect to test the resistance at $362. Given that the fundamentals support the same direction, ETH might possibly reach up to $500.