Home / What Caused the Bitcoin Price to Plunge below $10,000 in the Second Week of June?

What Caused the Bitcoin Price to Plunge below $10,000 in the Second Week of June? 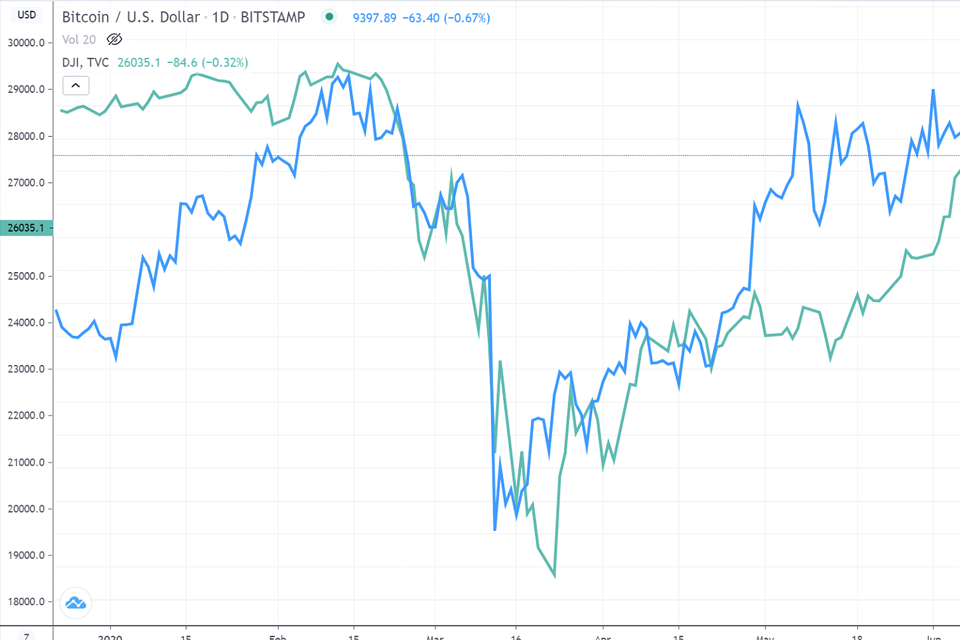 Bitcoin, the most valued cryptocurrency, has seen several ups and downs on its journey. It is considered the most volatile asset class in the financial market.

In the second week of June, precisely the Bitcoin market saw a massive drop in its prices. Bitcoin, which was trading around levels of $9,800, fell to $9,000 from $10,000 within a day, in a matter of 15 hours. This 9 % crash in price can be accounted for by various fundamental and technical reasons.

Causes for the Bitcoin Price Drop

According to experts, three highly weighed factors made the Bitcoin drop to levels of $9,000. The factors are as follows:

Out of the three, the correlation seen in Bitcoin with the US Stock market is considered to be the major factor that has led to a massive fall in Bitcoin rates.

While many stock market analysts are reluctant about whether stocks and Bitcoin have the same trajectory, some have pointed out that these two assets have a positive correlation coefficient during panicky moments. One of the big names, JP Morgan, also thinks that trading the stock indices is not any different from trading the Bitcoin market.

Correlation Between Bitcoin And The Stock Market

The COVID-19 pandemic has put the economy and the financial markets into crisis. During the beginning of the crisis, the stock market slumped, making new lows. Bitcoin followed the same trend as well. This correlation is seen from the beginning of 2020, where the Bitcoin market is following the stock indices in price action.

For instance, on 7th March 2020, when the global stock indices saw a huge decline, the Bitcoin market saw a huge crash from around $9,000 to $3,800 on 13th March. The correlation between the two left Bitcoin investors and speculators in a shock. Thus, this event led to the disapproval of the hypothesis in which Bitcoin is viewed as a safe-haven for investors during a global sell-off in the equity market.

Under the same note, history repeated on 11th June 2020. Moments before Bitcoin shot down to levels of $9,000, the pre-market of the DOW Jones index showed a 900-point gap down in the market. Before the US equity market opened, the DOW fell by almost 3 percent during the after-hours trading session. As the market opened and the prices were heading south, the Bitcoin price became a follower and started to fall from around $9,000. That being said, the slump in prices is not necessarily the sole reason for the US equity indices fall. Perhaps this could be due to the uncertainty among all asset classes, which fueled the cryptocurrency market drop.

Below is the candlestick chart of BTC/USD on the Daily time frame. The overall market is sideways, which is slightly inclined downwards. The Purple line represents a strong Resistance level. The market dropped thrice from this level, where the second push was stronger than the first one, indicating the resistance level’s power. With this in mind, let’s head down to a lower time frame to understand the reason for the drop in the market.

Consider the 4-hour chart of Bitcoin, as shown below. Seeing the overall trajectory of the market, it started off as an uptrend but then moved sideways. The red line ($10,013) represents the Resistance level (a price where the market dropped every time it reached that point).

Thus, in consideration of the three fundamental factors and technical analysis, as explained, the Bitcoin prices slumped from $10,000 to almost $9,000. In hindsight, the market recovered to $9,500 and is presently around the same area. For the future, we need to see how the global market pans out amid the COVID-19 pandemic and watch how it affects Bitcoin prices.