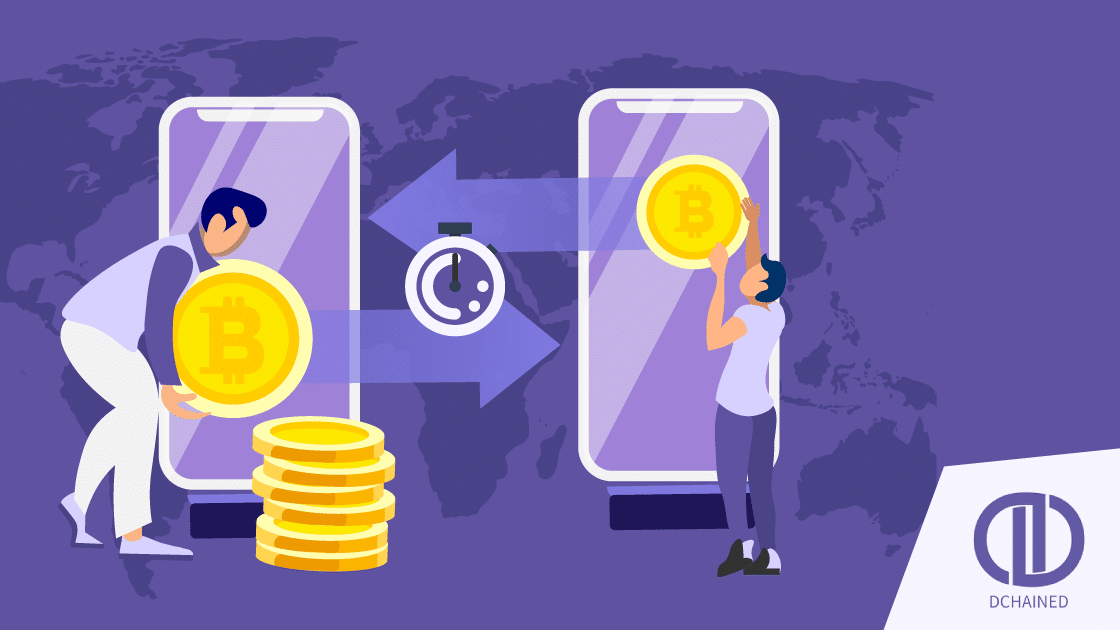 Bitcoin transactions are made using wallet software. Either your own wallet, or the wallet of the exchange or other online provider that is holding your funds. The transaction is sent to the Bitcoin network, and miners then work on processing the transaction so that it can be approved.

Each miner (or mining pool) takes a ‘block’ of transactions from the mempool (a pool of waiting transactions) to process in one go. Miners get paid a fee to process transactions, and each block can hold about 3,000 transactions. It takes about ten minutes to successfully process a block.

To prevent fraudulent actions, such as spending the same bitcoin more than once, a transaction is not usually considered ‘complete’ until it has been approved in several blocks by several different miners.

The Bitcoin network operates using a Proof of Work system which means that the more miners there are on the network, the more secure the network is, and the harder it is to make fraudulent transactions.

If you are receiving a Bitcoin payment, the sender may provide you with a transaction ID that you can use to look at the transaction in a blockchain explorer tool. This will let you see how many times the transaction has been confirmed. It’s a good idea to wait until there have been several approvals before you count the money as being received.

Exactly how many approvals you should look for depends on how big the payment is, and how high the risk of fraud is. A small, regular payment from a person you know well is likely safe to accept after a couple of confirmations. A payment to purchase a car from an unknown buyer, however, is worthy of caution and you might wish to wait for 6 confirmations to consider the transaction “safe”.

How Long Does Bitcoin Take to Send?

Because it takes about ten minutes for a block to be mined, this means the fastest a transaction can be completed is ten minutes.

The requirement for a transaction to be approved in several blocks (usually three to six, depending on the nature of the transaction) to be considered “safely completed” means the transaction may take longer than ten minutes to confirm.

If there are a lot of transactions happening on the network, it could take longer than ten minutes to send Bitcoin to someone. During periods of network congestion transaction times have been known to reach several hours.

This all assumes you’re sending from one individual wallet to another. Transactions between two wallets on the same cryptocurrency exchange may be instant because the exchange handles wallets differently. Paxful and Coinbase, for example, both offer instant transfers.

The time it takes to withdraw cryptocurrency from an exchange to a personal wallet could vary massively. Some exchanges may allow you to pay a fee to have the withdrawal take place as quickly as possible. Others might offer an option to have your transaction bundled with others, saving fees but making the transaction take much longer.

Is It Possible to Send Bitcoin Faster

Miners are rewarded for contributing processor time to the network through both a reward for discovering blocks, and via transaction fees.

The transaction fee reward can be set by the person sending the coin. Miners will try to pick up the blocks that offer the greatest reward. Therefore, increasing the transaction fee offered when you send a payment can make the payment get approved more quickly.

Another way to send payments more quickly is to use the Lightning Network. This is a network that is build on top of the Bitcoin protocol but that is able to handle more transactions, with faster processing fees and lower fees. The Lightning network has some limitations on transaction sizes, however.

How Much Does it Cost to Send Bitcoin?

Bitcoin transaction fees vary depending on how busy the network is. At the time of writing, to have 95% confidence that a transaction would confirm within six blocks, you would need to pay around 2,200 satoshis on the legacy network, or around 1,500 satoshis using the newer SegWit transaction type. That’s between $1.67 and $2.36 per transaction, based on current Bitcoin prices.

Again, this assumes that you’re sending currency from a personal wallet to another personal wallet. If you were trying to withdraw currency from an exchange wallet to your own wallet. If you are trying to withdraw funds from an exchange you may find the exchange absorbs the transaction fee for you or gives you the option of bundling your transaction so that the fee is lower.

Some exchanges may charge withdrawal fees, trading fees or other transaction fees that are higher than the fees charged by the network itself. If you’re purchasing Bitcoin with the plan of immediately sending it to a friend or using the coins to pay for a purchase, compare prices with several exchanges, factoring in all fees and charges, to make sure you are getting the best deal.

One of the challenges with Bitcoin is that transactions are slow to clear (those fees are for a 60 minute transaction time). In addition, the value of the currency is volatile, with swings of 3% in a few hours being normal and 25% or more not being uncommon, and the fees aren’t based on the monetary of the transaction.

All of this is likely to change, however, and as transaction fees fall and sending Bitcoin gets faster, we can expect to see adoption increase.

Now that you know all about the time it takes to send bitcoin, it’s time to get more expert knowledge on crypto and blockchain technologies. Interested in learning about similar coins and wallets? Join Dchained! Dchained subscribers get access to tons of great guides, expert analysis, and a community of passionate blockchain enthusiasts.